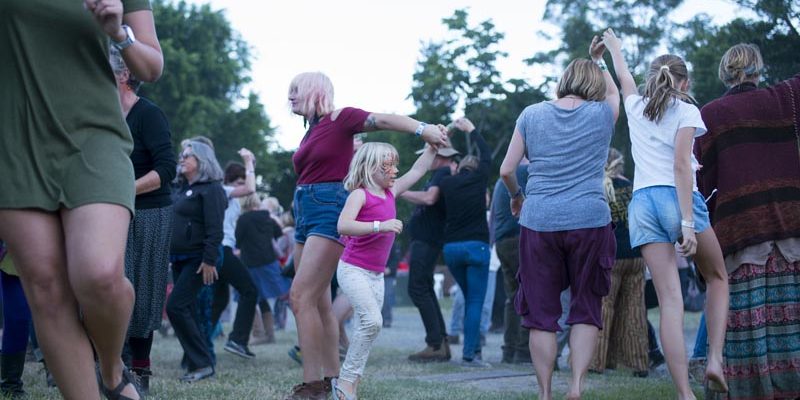 HOW TO MAKE A MAGNIFICENT MURAL

It’s an interactive, colourful and lasting memento of a weekend well spent, but there are a few tricks of the trade Woodfordia’s Artist in Residence uses to ensure the magnificent murals created at The Planting festivals turn out looking as good as they do.

After the success of the first community mural project at The Planting in 2016, Gavin Ryan led festivillians at this year’s event on another creative journey of self-expression.

Set at a perfect painting height for most adults (and some children), the murals are large-scale works measuring 7.2m long and 1.2m wide.

Gavin does much of the prep work, including painting an outline, before the festival begins.

“I have a quite well thought out formula now,” he says.

“There is a set of parameters that the mural works within and they include tonal range and strong simple black line work.”

Once the festival has started, festivillians are free to contribute to the mural in any way they like.

“Some people will just do lines and dots while others will paint really elaborate stuff; the finished product reflects different ideas, different skill levels.”

While that might sound like a recipe for chaos, Gavin has a trick up his sleeve to make sure the overall composition isn’t compromised.

“We use the smallest brushes that we can possibly find, so that whatever people do isn’t overriding the basic design that is already

there. A tiny brush gives people creative freedom within a small space.

And the results speak for themselves.

“For The Planting mural this year [see above], what you see is what was created at the festival. I didn’t do any retouching at all.”
Gavin says the mural project embodies what the festival is all about: audience participation, inclusiveness and ownership of the experience.

Gavin says part of the reason the mural ends up looking so aesthetically pleasing despite the input of many hands, is in the limited colour palate used to create it.

“You look at the finished product and you can’t believe it’s been created out all 4 tubes of paint; acrylic signwriters mural paint, nice bright stuff.

“Choosing a palate with as few colors as possible means you are much more likely to get a consistent and harmonious outcome.”

As an artist whose original design forms the basis for the finished work, Gavin is personally invested in the project from start to finish.

“It can be really challenging to let go of any preconceptions of how it ends up.

“But I actually want people to do their own thing, to feel unconstrained by any preciousness on my behalf – to run amok and do whatever.

“One of the things that really makes it [the mural] work, is when you get up close and see the different styles and hands that have been involved.

“It’s these tiny individual expressions sitting within the overall framework which make it a success.”

The mural from the 2016 festival

The completed murals from The Planting festivals of 2016 and 2017 will be likely be used at future festivals and events as screens or decoration, or as part of the gallery within the permanent site office.

A smaller mural (4m x 900mm) painted by Citizens and Department Heads at the inaugural Parliament Day has already found a permanent home around the bar at festival venue known as The Duck.