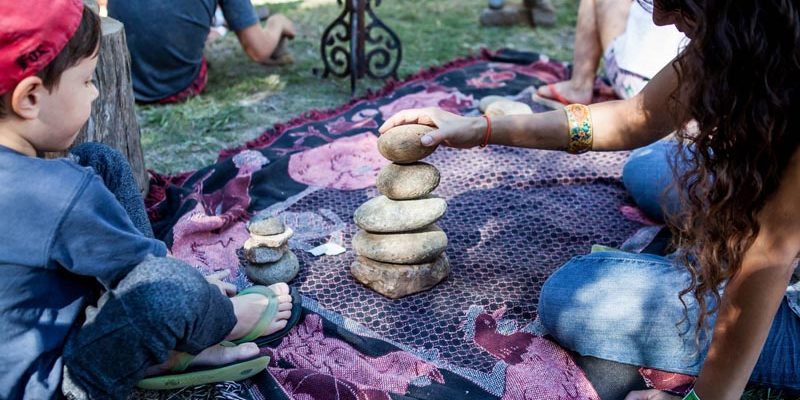 Seek solace and sustenance as you plunge headfirst into our annual three-day cultural event, The Planting. We couldn’t be more excited to bring to you these maestros and troubadours to help us all kick up our feet and celebrate after a day’s learning and nurturing Woodfordia’s 500acre parkland. More than a festival, join us as we celebrate some of our most talented artists, intellectuals, foodies & musicians; both home-grown & from afar.

This year’s musical highlights include… The East Pointers (CAN) A folk singer-songwriter and multi-instrumentalist, Kristina is known for her sometimes humorous, heartfelt and often ribald songs. Born in San Francisco and raised in Haight-Ashbury during the 1960s, Kristina͛s approach to music and life was formed from within an environment of vital cultural expression, social activism and diverse musical influences. Kristina is holding a Songwriting Masterclass as part of the Artisan Camp Series. Gawurra Gaykamangu is a Yolngu performer hailing from Arnhem Land. In 2016 he won the Northern Territory Song of the Year in the Pop category for the demo version of his song ͚Ratja Yaliyali͛, the lead single on his debut album of the same name. This year, Gawurra was nominated for five NIMA awards, and won four of those. Gawurra is passionate about keeping his Gupapungu language strong. With vivid storytelling, colossal vocals and a powerfully captivating stage presence, Tasmanian-born Claire Anne Taylor leaves the audience in no doubt that they have just witnessed something extraordinary. Rose Eden This Brisbane-based folk singer-songwriter has been performing her original songs both in bands and as a solo performer for the last 15 years at a variety of music festivals and venues across Queensland and Victoria. Shannon͛s solo sound is a chilled summer brew of laid back roots, saltwater folk and acoustic soul. Laying down live loops created with a guitar and an array of foot pedal gadgetry, Shannon presents stripped back renditions of songs from the Band of Frequencies and discography, new original material and selected tracks from his favourite songwriters. Originally formed in Ireland and now based on the Sunshine Coast, The Barleyshakes͛ music is Irish at its core with contemporary influences. Featuring fine musicianship and great craic, its hard to resist without cracking a grin. This seven-piece indie soul band, made up of some of Sydney͛s finest musicians, blends elements of jazz, electronica and soul with contemporary influences. These progressive surf roots rockers have toured internationally, supported artists such as Donavon Frankenreiter and John Butler, and won Queensland Music Awards, all while keeping their Sunshine Coast sound well and truly alive. Band of Frequencies toured California as co-producers of the Transparensea Voyage film, screening at The Planting this year. The Australian Voices commission and perform the work of Australian composers and they are currently hosted as ensemble-in-residence at Queensland Symphony Orchestra.

Simone Pope, Clara Domingo, Andrew Veivers and Shenton Gregory bring together the intricate rhythms, dazzling footwork and raw energy of flamenco, encompassing both the ancient richness of the traditional and the virtuosity of contemporary flamenco.

We welcome you to join us at Woodfordia, where we work and learn by day, and play by night. Come Imagine, Search, Create & Discover with us, book your tickets online.

To extend your Planting Festival experience, book a masterclass in for the week before the festival as part of the Autumn Artisan Camp Series in the natural bush surrounds of Woodfordia. Final places are still available, for more information and to secure your place: https://theplantingfestival.com/programme/masterclass.html

Workshops and tickets must be booked online prior to the festival.

Book your workshops and early bird tickets online now for The Planting Festival at Woodfordia, an hour north of Brisbane over the Qld Labour Day long weekend, 28-30th April. We hope to see you there!