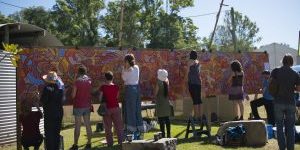 This year’s Planting Festival was expanded by 50% with double the fun in workshops, presentations, demonstrations, music performances and the children’s program. Here is an update of what went on at some of the environmental workshops, I got myself involved in:

The rain did not to stop the biochar kilns burning during the Let’s Make Biochar workshops. The heat was on with Dr. Paul Taylor, the author of The Biochar Revolution discussing some amazing facts about biochar production and properties.

In his talk, Paul firstly presented some great data such as the significant yield increases from soils enriched with biochar, the science behind the different stages of biochar production and how to activate biochar with organic matter to feed the microbes, which make biochar a powerful soil enrichment.

The workshops were fully booked and participants were eager to contribute their efforts in creating biochar, as Paul guided and explained the different stages of biochar production. The science of creating biochar is incredibly fascinating for those that have the imagination to grasp it. The bottom line is, practice makes perfect, so the more biochar one creates, the more one learns and understands the processes of pyrolysis, gasification, and combustion, which can actually be seen in a flaming match.

Adding fuel to the biochar kiln.

Sean Morrow got everyone hopping to the Frog Pond and Wildlife Habitat workshops. Participants were inspired by Sean’s experiences of living amongst an abundance of frogs, which inhabit his six-acre property. The frogs breed in the 36 ponds Sean has installed for them and other wildlife, providing a beautiful chorus every night, to let him know that they are thriving.

The first workshop was fully booked with children at the forefront eager to get the pond started. Sean passionately described each step of the process, critical to the durability of the pond, its aesthetic appeal and to the creatures that will inhabit the pond.

Adding logs to the pond, providing habitat for various creatures.

While many participants engaged their creativity arranging rocks and logs in and around the pond, others took notes, watched and asked questions. Eight people vowed that they were going to install a pond when they got home. We would love to hear from you if you have installed one at home and if you would like to share your story.

The Insect Biodiversity workshops attracted participants interested in entomology, the insects science. Christopher Carr, an entomologist dedicated to Woodfordia, spent considerable amount of time preparing various insect traps for the workshops, a week before the festival.

Workshop participants were divided into small groups to collect insects from different traps. Each group had the opportunity to work with three different methods of collection. They have learnt about how to investigate invertebrate diversity, using various trapping techniques, and some facts about the specimens that were collected.

This Woodfordian citizen science research project has contributed to investigating the hypothesis, that the more established the habitat, the greater the diversity of insects inhabiting the habitat. The three collection sites were investigated for insect diversity based on the age of trees. One site was in an established, possibly remnant forest; samples for the second site were collected around trees that have been planted between 10 and 15 years ago; while the third site was amongst 1-3 years of growth.

Christopher has already noticed that there is a difference between the invertebrates collected at each site. He is now going to engage students at Southern Cross University, to identify the species collected. This data will serve as the start of cataloguing and mapping Woodfordia’s invertebrate diversity.

In addition to the many workshops that inspire biodiversity and habitat creation, 632 plants were planted during the planting sessions. This year 176 people got down on their knees and got their hands dirty. Despite the rain on Sunday, 70 dedicated troopers turned up, with the Planting spirit in their hearts, to plant a sapling or three.

Celebrating a planted bamboo with a dance.

The total of 632 plants included 72 species of rainforest plants, 310 native grasses, representing 4 species; and 122 trees, including 30 Bush Food species, 30 Cycads and Tree Ferns, as well as 140 Butterfly Host Plants. Ninety-eight species of plants have been welcomed to their new home at Woodfordia, contributing to the total of 104,711 plants, planted over the last 22 years. This is what the Planting Festival is all about; planting evermore beautiful and sustainable habitats for all Woodfordians to enjoy.

The bamboo planting team with Arif Rabik (on the left).

A big THANK YOU to the contribution by our dedicated volunteers. These efforts continue during the monthly gatherings of Tree Huggers, Woodfordia’s volunteer planting team. If you are interested in becoming a Woodfordian Tree Hugger, let us know. See you at the next Planting.