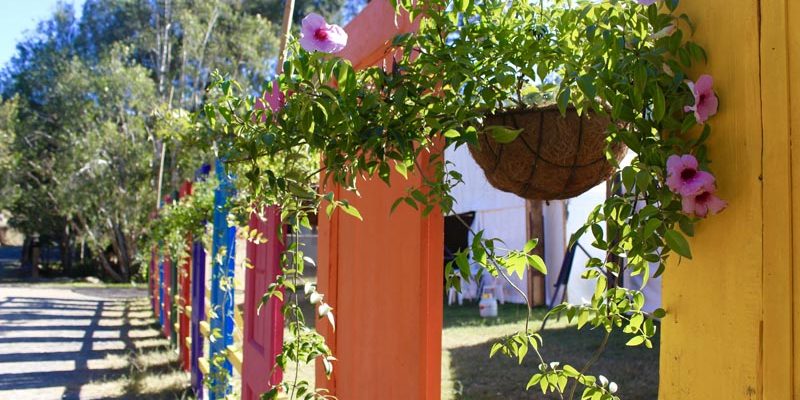 In a first for The Planting, this year Julian Grigg and I lead two Myco-Restoration Workshops, teaching festivillians how to use fungi to restore a damaged ecosystem. We had a great turnout and a lot of fun.

The ecological role of fungi is an important one, particularly because of the magic of fungal mycelium; the threadlike network that fungi use to feed themselves and other creatures and to communicate information across forests forming a Wood Wide Web.

Wood-rotting fungi play an essential function in recycling organic matter such as leaves and wood, by feeding the soil and plants nutrients as it decomposes. Those nutrients are then picked up by plant symbiotic mycorrhizal or root fungi and relayed to plants.

Fungal mycelium is a wondrous network of fungi fibres, which can be grown on agro-industrial by-products to produce biodegradable furniture, bricks, insulation, clothing and plastics, to mention a few. Mycelium of certain fungi can also degrade pesticides, petrochemicals and other pollutants including plastic!

To remember the word mycelium, just think my-silly-arm, coined by Woodfordia performer Charlie Mgee and his band The Formidable Vegetable Sound in a song called Mycelium Arms Around Ya.
To hear it, read the lyrics or buy it, go here http://music.formidablevegetable.com.au/track/mycelium-around-ya

The site for the myco-restoration workshop was a heavily eroded bank along one of the Woodfordia’s access roads. Once they had an understanding of the importance of fungi, participants got to work creating a habitat for mycelium to grow in. Since mycelium is a very collaborative, cooperative and communicative network, we tried to think and work like mycelium does; passing a pile of recycled pine logs to one another rather than working individually. We then distributed several piles of two different types of mulch onto the banks in the hope spores of native wood rotting fungi will make the mulch their home after landing on it and spread their mycelium throughout.

Once established, the mycelium will help to stabilise the bank, prevent water runoff and thus erosion, feed the soil with nutrients from the decomposed mulch and become suitable habitat for tree seedlings.

I also presented a talk on Myco-Ecology at The Planting, which inspired some to join the “Fun-Gies”, a team of Woodfordia’s myco-maniacs. The team will meet on the last weekend of each month as part of the larger group of Tree Huggers (INFO) for a couple of working bees, and fun by the fire with food, drink, a sing-along and a yarn amongst friends in the evening.

We will continue our myco-restoration of erosion, but also serve Tree Huggers who spend each month weeding and planting. We will be preparing the ground for them by creating mycelium habitats, so the mulch and the mycelium feeding on it can help to suppress weeds, break up hard soil, feed the plants and hold water within the soil. Our endeavors will also reduce the need to water, fertilise and weed, saving time and money.

Fungi are beautiful and mycelium creates fungi, so perhaps we can work on creating a fairyland of fungi as part of the décor for future festivals. We will also learn how to identify and document our existing myco-flora, to contribute to the science of taxonomy of Australian fungi, which currently is heavily understudied and underfunded.

We will also be developing methods for myco-remediation of soil and water pollutants to share with communities around Australia, creating a blueprint on how to restore Australian ecosystems from the ground up.

If you would like to join us in any of these projects or simply to join Tree Huggers, please email Paul Power at treehuggers@woodfordia.com or me directly at sandra@woodfordia.com.

Our first meeting will be held on Sunday the 28th of May, but you are invited to join us for the Saturday evening fun. Hope to see you then.
Yours myco-faithfully,