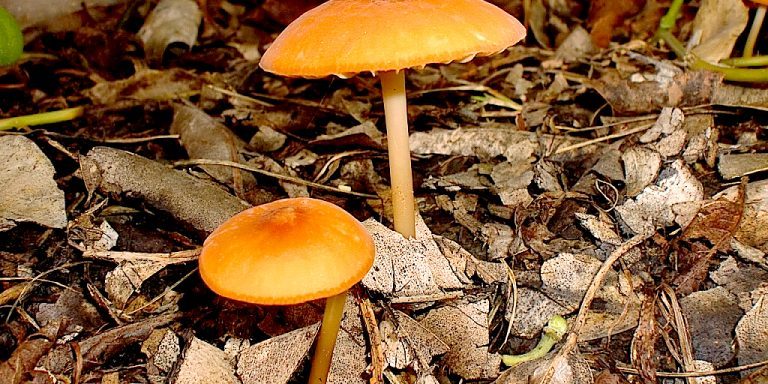 World renowned truffle expert Professor James (Jim) Trappe recently visited Woodfordia, home to The Planting Festival and the Woodford Folk Festival, to share some of his extensive knowledge of what he calls the ‘unsung heroes of the forest’: fungi, including truffles.

You might know truffles better as an expensive delicacy found on restaurant menus, but underground root fungi – including truffles – play a vital role in delivering nutrients to trees.

Some animals rely on truffles and other fungi as their primary food source, so while the ones growing underground at Woodfordia aren’t likely to end up on your dinner plate, they do play an important role in the diet of resident wildlife.

Following his talk at Woodfordia’s General Story, Prof. Trappe led a foray around the Cloudland camping precinct to search for truffles growing at the base of the drought tolerant Eucalypts living there.

Professor Jim Trappe (middle) with friends in the forest at Woodfordia

Prof. Trappe shared a couple of hints on what to look for when searching for truffles:

It is useful to use a long-handled rake to avoid straining your body, but only if you want to become a serious truffler. Any small-pronged tool will do the job, and you only need to scratch to the depth of about five centimeters to find truffles. If you do scratch around and find a truffle, look for more as fungi establish colonies and therefore are likely to have several fruiting bodies. While their size is a little underwhelming, these tiny truffles play an important role in the ecosystem

As Prof. Trappe demonstrated the technique of truffling, he decided that the site we had chosen was not the best. At the same time, I noticed a tiny mushroom growing in the litter and started to rake through the soil with my fingers, as I didn’t bring a rake. To my great surprise a small truffle appeared in front of me. I took it to Jim, he cut it open with his pocketknife and lo behold, we had our first truffle!

Ok, they are not exactly exciting; these pebble-like fruiting bodies can be easily mistaken for small stones – I have picked up a seed once thinking it was a truffle. However, when you find your first few, I guarantee that you will be excited, especially since it might be a new species.

IS IT A TRUFFLE?

The way to tell if it is a truffle is firstly to look for the mycelium or its root system. Squeeze it gently between your fingers and if it feels firm but spongy, it is a good indication that it might be a truffle. Cut it open to see if it has a skin layer that is normally different in colour, or is distinct in some way to the inner chore. With many truffles being quite small, it might be useful to have a magnifying glass.

It usually takes a long time and lots of dedication before one finds a truffle as a novice truffler. Many of our trufflers walked away satisfied, one of whom reported to have been trying to find truffles for years with no success until now.

If you do find truffles, it is worth collecting them into a small paper bag with your name, date, GPS coordinates and associated tree species or types. Contact the Queensland Mycological Society to find out more about how to dry them and prepare them for the Herbarium, as you may have found a new species. With at least 2000 truffle species in Australia, and only 300 having been described, your chances are quite high.

It was an absolute pleasure to have Professor Trappe visit us and for him to share some of his 60 or so years of expertise with us. Despite being 86 years of age, Prof. Trappe said he would return to Australia next year.